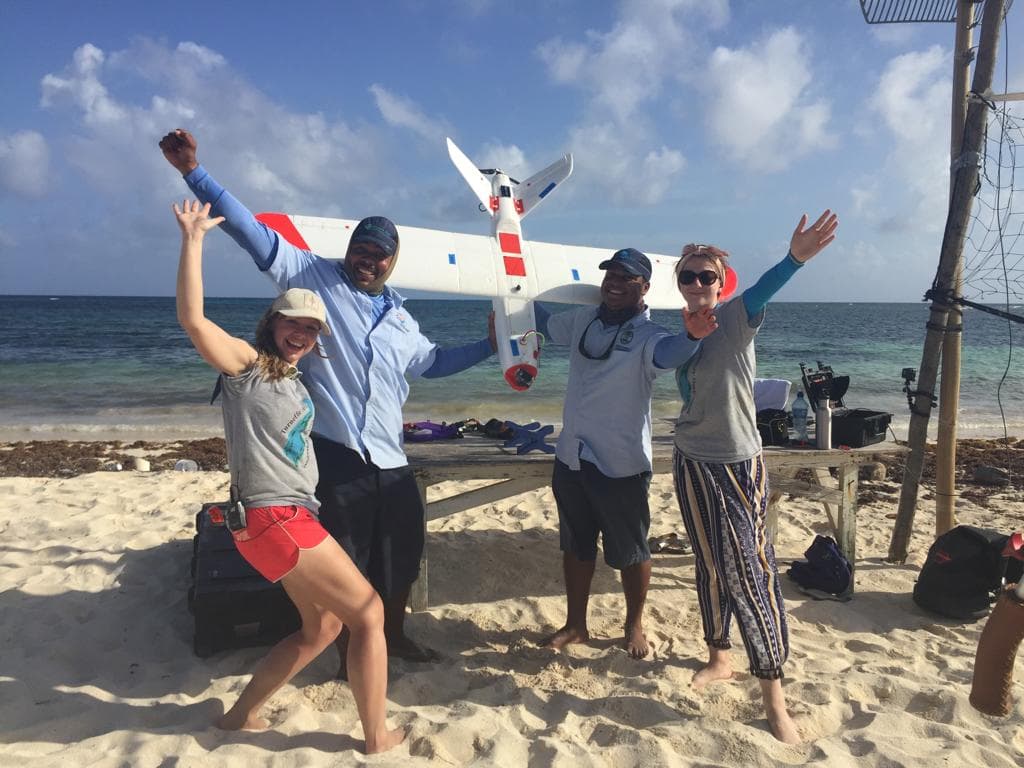 Two units of amphibian Aeromapper Talons were utilized successfully during a set of trials during an expedition to beautiful Turneffe Atoll in Belize, in a work lead by the Zoological Society of London and the Turneffe Atoll Sustainability Association. The drones, built by Canadian company Aeromao, were used to detect and document illegal fishing activities and ecology research toward conservation efforts. The Turneffe marine protected area (MPA) in Belize, was delineated in 2012, but is difficult to manage, in part due to illegal fishing, its remoteness, and high running costs.

The water-landing and waterproof fixed-wing, long range, multi camera drones were trialled to monitor and survey marine megafauna (such as turtles, dolphins and sharks) but also as an exercise to gather evidence of illegal, unreported and unregulated fishing (IUU).

” The amphibious drone was able to fly to the site of interest at 110m altitude, gather intelligence and fly back very quickly. The images highlighted that indeed illegal building work had been occurring. Without the UAV the conservation officers would have no way of knowing this and they were very excited at this revelation”, states one of the conservation officers.

The current enforcement strategy on the Turneffe atoll involves patrols in small boats, around the atoll, to find illegal fishers. Systematic surveys for megafauna aren’t regularly carried out, so the conservation officers tend to document animals they happen across on their patrol. However, boat fuel is very costly, and this limits the amount of area the conservation officers can patrol. The drones proved to a be an exceptional low-cost solution to these challenges.
As part of the flight trials, two of the senior conservation officers were trained on site (who were complete novices in fixed-wing operations) in how to prepare and deploy the drone, how to plan missions and how to monitor flights and ensure a safe water landing. 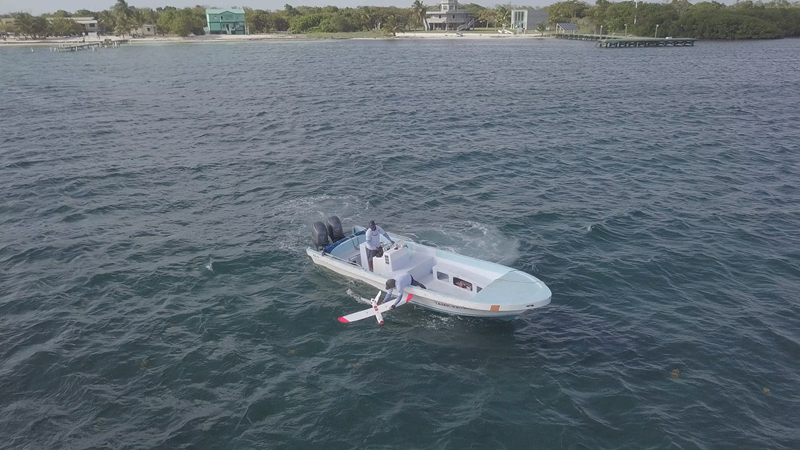 The conservation team found the front live-link HD camera an exceptional revelation, especially since they were immediately able to spot a diving boat on the LCD screen, that they could barely see from land. The UAV can fly for up to one and half hours, which, flying at 62kph, is a considerable distance and area potentially covered for surveillance.
The pair of drones were also repeatedly operated in BVLOS scenarios. In fact, 24 BVLOS flights were successfully flown during the trials, average length of 10.9km and with total transect lengths of 263km. The UAV reached a furthest point Beyond Visual Line of Sight (BVLOS) of 11.3km. BVLOS was tested in a scenario where the conservation officers particularly wanted to scope out a development site several kilometres away across a large bay in order to detect any infringement of their building contract. The amphibious drone was able to fly to the site of interest at 110m altitude, gather intelligence and fly back very quickly. The images & video recorded highlighted that indeed illegal building work had been occurring. Without the UAV the conservation officers would have no way of knowing this and they were very excited at this revelation “We now have the tool we need to see further and faster than before. No one will see us coming!”, Maurice, a conservation officer reported.

“The pair of drones were also repeatedly operated in BVLOS scenarios. In fact, 24 BVLOS flights were successfully flown during the trials, average length of 10.9km and with total transect lengths of 263km. The UAV reached a furthest point Beyond Visual Line of Sight (BVLOS) of 11.3km.”

Whilst the UAV flies, the 20mp nadir camera takes 5 images per second, or stunning HD film and the front camera, which can be panned left to right, films and records a live stream, allowing the conservation officers and us, to see what’s out there, in real time, on an LCD screen back at the ground station. Although the drones normally fly on pre-designed routes in auto mode, switching to “assisted mode” to investigate something of interest, is no problem. This kind of flexibility means that if fishers are found in the wrong place, the drones can be steered quickly to get closer pictures of them or loiter around the point of interest at the desired altitude to keep a constant eye in the sky, or if dolphins are spotted for example, the drones can be redirected to take a closer look and use the images to estimate the numbers of the population in the area. Mapping of habitats, using the nadir camera was also possible. Some areas of coral reef and seagrass beds were mapped using Agisoft Metashape. 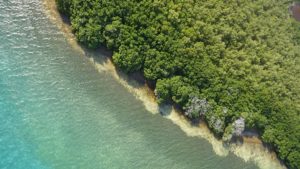 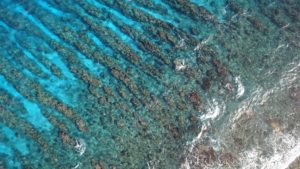 Several static launches of the UAV from a small, moving skiff were successfully performed, which is something that is unheard of for a fixed wing – long range amphibious unmanned aircraft. This is a tremendously important, and previously unknown ability of the UAV, as it now means that the conservation officers can steam to an area where a beach for launching may not exist (very common in mangrove forests), and simply launch from the boat, then land on the water besides the skiff once the mission is completed. This way, no-where the atoll is out of reach for the conservation team.

Impressive geo-referenced images of turtles, sharks, eagle rays, manatees and birds were gathered during the surveys. A variety of habitats were captured, and to identify environmental issues, such as accumulation of plastic debris, and of sargassum seaweed which can cause deoxygenation of the water and block out sunlight. 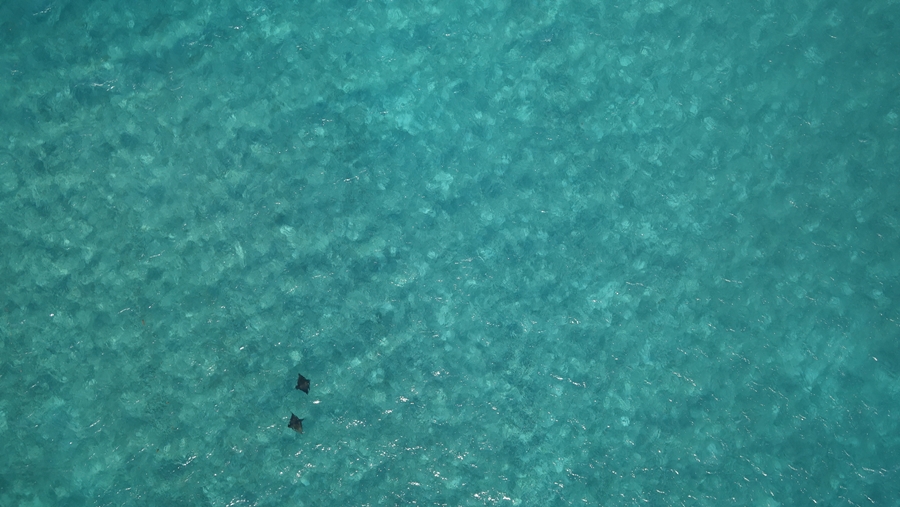 Data was used to build a spatial picture of how the atoll is used, be it by fishers or fauna, i.e. how the animals use different habitats and when, and when and where fishers are acting with impunity. The results and conclusions can feed directly into planning where marine protected zones are placed. Previously, information on fish abundances would be collected from by-catch on fishing vessels. Since the Turneffe Atoll is a protected area, you can’t rely on catch data anymore- this is where the drones really come into their own as a non-invasive and efficient tool for surveying.

The scientists leading the expedition stated that having a UAV which can easily land on the ocean, safely, and be flown again in moments, is an exceptionally valuable tool. Likewise, the conservation officers in the Turneffe Atoll are adamant that a UAV like the ones trialled, will become an essential part of their patrolling and enforcement strategy, which will ultimately lead to increased biodiversity in the area.

About the Aeromapper Talon Amphibious

The Amphibious version of the Aeromapper Talon allows maritime operations by autonomously belly landing on water. It’s the perfect solution for scouting, data collection and mapping thanks to its dual camera set up and long-range video link, up to 2hr endurance and demonstrated BVLOS capabilities up to 30kms from the operators.
The only truly amphibious multipurpose fixed wing drone in the market today, it can sustain repeated operations in salt or fresh water. Perfect for:
– Fisheries
– Marshlands
– Marine research and conservation
– Search and rescue
– Water quality monitoring
– Off-shore infrastructure inspection
– Coastal surveying
– Hydrography
– Marine management
More information: https://www.aeromao.com/products/aeromapper-talon-amphibious/