Update! The Ocean Cleanup and Oceans Unmanned has returned after a successful deployment that included more than 20 flights with the Aeromapper Talon Amphibious.

FASTEN YOUR SEATBELT
and take a ride on one of our drone flights performed last month in the Great Pacific Garbage Patch (GPGP).

We use drones to gather data to map plastic hotspots in the GPGP, which helps to continuously improve the efficiency of our cleanup operations. pic.twitter.com/x8vyLJeoPy

In another amazing implementation of drones for environmental protection, Oceans Unmanned and The Ocean Cleanup have joined forces to fight marine debris.

Oceans Unmanned, Inc. is a non-profit dedicated to the use of drones for environmental protection:  The Ocean Cleanup, a non-profit founded in 2013 to deal with the problem of plastic and debris in the ocean.  Now, the two will work together, using drones to evaluate and improve ongoing efforts to capture and remove marine debris in the Great Pacific Garbage Patch. “Later this summer, a team of Oceans Unmanned operators equipped with several UAS will deploy offshore with The Ocean Cleanup researchers for a six-week campaign to conduct daily aerial surveys in an attempt to quantify the distribution and abundance of marine debris in the target area,” says an Oceans Unmanned press release.

It is estimated that over five trillion pieces of plastic currently litter the ocean and accumulate in five ocean garbage patches, with the largest one being the Great Pacific Garbage Patch located halfway between California and Hawaii. Founded in 2013 to address this issue, The Ocean Cleanup is developing technologies to capture and retain at-sea marine debris to bring it back to shore for recycling. In July, the organization will head back out to the Great Pacific Garbage Patch to deploy the third iteration of their ocean cleanup design. The first system was deployed in 2018, and the second, improved version in 2019. “We successfully performed a feasibility assessment on UAS-based remote sensing for the quantification and detection of floating plastic in 2018,” stated Robin de Vries, The Ocean Cleanup Geospatial Analyst. “When we decided to ramp up this area of our work, we turned to Oceans Unmanned because of their years of proven maritime UAS expertise.”

“We’re very excited about this partnership,” said Matt Pickett, Director of Oceans Unmanned. “We’ve been following the great work of The Ocean Cleanup for several years, and we’re looking forward to supporting their efforts. We’re big believers in the power of technology to address longstanding environmental challenges and marine debris is an area where we think we can make a big impact.”  The waterproof Aeromao Talon Amphibious UAS will be launched from the ship, survey for approximately two hours, then perform a water landing and be recovered by a small boat.  Imagery captured by the UAS will be analyzed through an automated neural network for object detection which can direct on-site collection efforts and evaluate recovery system efficiency.

“We will be operating over 1000 miles offshore, and a UAS is the perfect tool to help analyze this global problem,” CAPT Brian Taggart, NOAA (ret), Director, Oceans Unmanned, tells DRONELIFE.  “We hope to make an impact!” 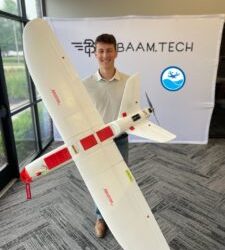 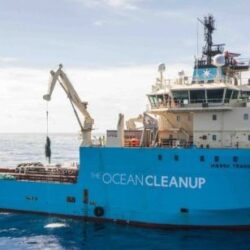